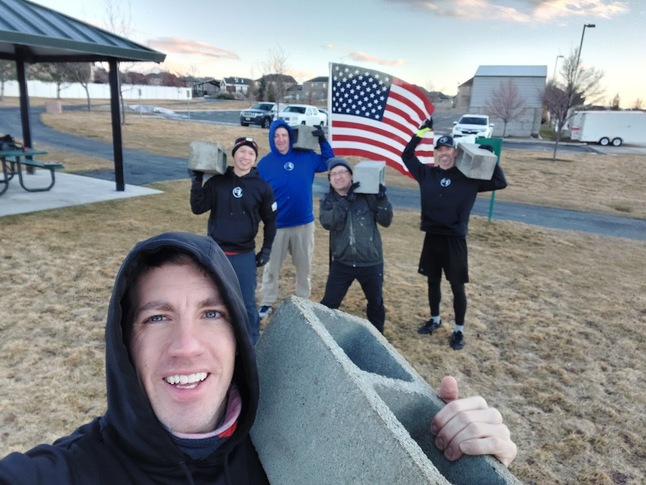 This was my first Q since the new 2.0 last October. My 2.0 Webslinger wanted to design a workout with a beanbag toss. Noticing that we hadn’t done coupons in a while (or at least not at the few postings I’ve done), I took his idea and changed it into a coupon toss.

An old dog bed and outdoor blanked served as the target for our toss. PAX lined up all facing the field (north), rotating to the right (east) with each series. Each series consisted of the PAX in the middle leading 10 reps of either Squat Thrusters or Kettlebell Swings, then they would throw their coupon on the 10th rep toward the target in front of them. The outcome of the throw would determine the next set, which the throwing PAX would then lead us in.

Nearly every PAX was able to have a chance at the throw, with the exception of Sandbag. Kingpin/Raging Cheetah/Sandbag had a prior engagement that they had to leave early for (cheering Golddiger on in his Spartan Deka event).

After all had thrown, we had neither a clean hit nor a break, with most throws either bouncing to the edge or hitting the edge, thus a lot of burpees with coupon in hand were enjoyed by the PAX.

For Part II, we circled at the flag and proceeded through a number of muscle groups with the coupons, first biceps, then triceps, then calves, chest, and finally abs. Webslinger met his limit of the cold (it wasn’t even that cold, but Webslinger has grown soft indoors, plus YHC forgot his gloves).

Explosion of ‘rona cases lately was a topic. Another PAX of our own was mentioned to have contracted it, more were testing. Prayers were lifted for all impacted.